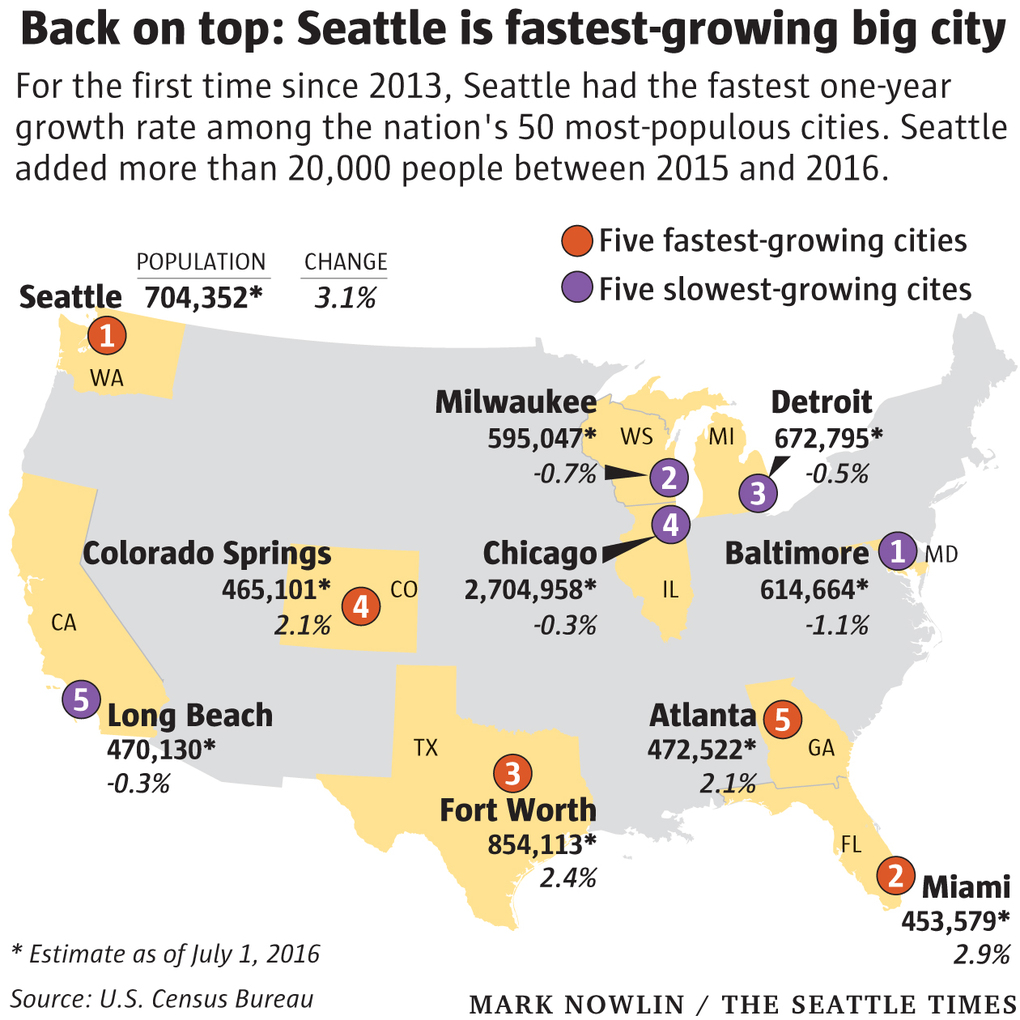 For the first time, Seattle is adding more people on average each year than during the post-Gold-Rush boom years. We’ve never grown this fast, and we’ve never been this populous.

Seattle is back on top.

For the second time this decade, we’re the fastest-growing big city in the country, according to my analysis of population data released today by the U.S. Census Bureau.

If you’re among the thousands of folks who moved here this past year, give yourself a pat on the back — you’re part of the team effort that got us there.

From July 1, 2015, to July 1, 2016, Seattle had a net gain of nearly 21,000 people — 57 a day, on average. That pencils out to a 3.1 percent population increase for the one-year period. Among the 50 most populous cities in the nation, that’s easily the fastest rate of growth. Previously, Seattle had ranked fourth among big cities.

Back in 2013, when Seattle first topped the ranks of major cities, we added 18,000 people for a growth rate of 2.8 percent. At the time, that seemed mind-boggling. Now, those numbers sound almost quaint in comparison. Seattle is a city on steroids.

Let’s put last year’s growth spurt in context: It marks just the second time since the start of this decade that one of the 50 largest cities exceeded a 3 percent growth rate. Austin, Texas, hit the mark in 2012.

Austin is also the only other city to rank No. 1 for growth twice since 2010. But the Texas capital has slowed in the past couple of years, falling out of the top five. So has the previous No. 1 city, Denver, which fell back to eighth place.

Seattle, on the other hand, seems to be picking up steam. How long we can keep going at this dizzying pace is anybody’s guess.

What you might think would be a logical deterrent to such rapid growth — the high cost of housing — sure isn’t keeping folks away. Not when the city is adding thousands of high-paying jobs.

With the big bump in population, Seattle also hit a milestone this past year, passing the 700,000 mark for the first time. And remarkably, it didn’t even take us 10 years from the previous milestone of 600,000 — that happened in 2009.

Seattle’s population, to be exact, hit 704,352 in 2016, according to the Census Bureau’s estimate. We remain the 18th largest city in the country, and also the 10th most densely populated, now with 8,391 people per square mile.

In terms of raw numbers, Phoenix was the top city for growth in 2016, adding more than 32,000 people. But Seattle’s gain of 21,000 residents still ranks an impressive fifth, just slightly behind New York.

With last year’s influx, we’ve added on average 15,658 people a year since the start of the decade. That eclipses, for the first time, the annual average growth from the city’s post-Gold-Rush boom years.

Among Washington cities with at least 50,000 people, only one grew faster than Seattle: Redmond, with a 3.2 percent growth rate. Bellevue grew less than half as fast. And only one lost population, though it was just by a 10th of a percent: Shoreline.

Seattle, of course, remains Washington’s largest city, ahead of Spokane, Tacoma, Vancouver and Bellevue, in that order.

Krupp, in Grant County, which has only added one person since 2010.